END_OF_DOCUMENT_TOKEN_TO_BE_REPLACED

AC/DC Live At River Plate is a definitive live concert video documenting AC/DC’s massive Black Ice World Tour. Shot with 32 cameras entirely in HD, AC/DC Live At River Plate marks AC/DC’s triumphant return to Buenos Aires where nearly 200,000 fans, and 3 sold-out shows, welcomed the band back after a 13 year absence from Argentina. This stunning live footage of AC/DC underscores what Argentina’s Pagina 12 newspaper reported by saying “no one is on the same level when it comes to pure and clear Rock ‘n Roll.” Additionally the Blu-ray contains a bonus feature titled “The Fan, The Roadie, The Guitar Tech & The Meat,” featuring interviews with AC/DC, their crew and fans among the excitement of the creation of the concerts and the city of Buenos Aires.

END_OF_DOCUMENT_TOKEN_TO_BE_REPLACED

You won’t want to miss your chance to see the past, the present and the future come together for an unparalleled musical event!

Captured across two nights at Madison Square Garden, the Crossroads Guitar Festival offers a variety of legendary guitarists performing a mix of sultry blues, classic rock and country jams. While Madison Square Garden is an epic arena, the concert remains intimate as Clapton and others collaborate on a sampling of the greatest hits of their careers. Held to benefit Crossroads Centre, a drug treatment and education facility in Antigua founded by Clapton, each concert has become a jam session of Clapton’s closest friends and music’s biggest stars – where anything can unfold onstage.

END_OF_DOCUMENT_TOKEN_TO_BE_REPLACED

Bryan, Kenny Chesney, Lady Antebellum, Little Big Town, Martina McBride, and Tim McGraw are just some of the artists who got together to pay tribute to Lionel Richie earlier this month. The special concert was taped on April 2 in Las Vegas after the Academy of Country Music Awards. Other performers include Darius Rucker, Rascal Flatts, Kenny Rogers and Blake Shelton.

END_OF_DOCUMENT_TOKEN_TO_BE_REPLACED

Thirty songs, spread out over two discs and well over two and a half hours, with fine performances, great sound, and good visual direction!

Without doubt, the Eagles are one of the all-time biggest acts in popular music since the dawn of the rock’n’roll era. The band’s roots go back to their role as defining artists in the phenomenally popular Southern California rock scene of the ’70s, a decade in which they delivered four consecutive #1 albums. Their momentous 2004 farewell tour filled stadiums around the world, and this 2-DVD set captures one of the most stellar events from that now-historic global sweep.

END_OF_DOCUMENT_TOKEN_TO_BE_REPLACED

CBS, along with the Recording Academy and AEG Ehrlich Ventures present Stevie Wonder: Songs In The Key Of Life – An All-Star GRAMMY Salute. The primetime special will celebrate the 25-time GRAMMY winner and beloved icon by highlighting his notable songbook, outstanding career, and unstoppable journey under music’s bright spotlight.

END_OF_DOCUMENT_TOKEN_TO_BE_REPLACED

This extensive collection gives an unprecedented insight into how The Beatles made their ground-breaking album. The box set features a new stereo version by Giles Martin and 33 tracks from the Sgt. Pepper sessions that place you in the studio as the group develop the songs. 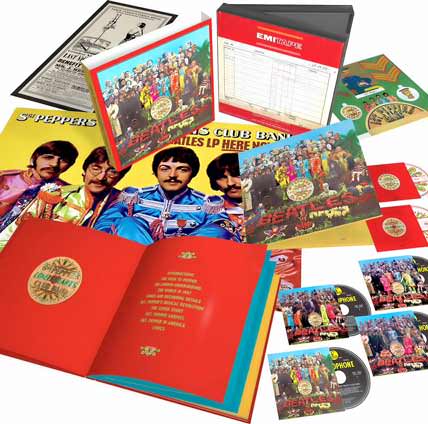 It was 50 years ago when The Beatles’ John Lennon, Paul McCartney, George Harrison, and Ringo Starr astonished and delighted the world, ushering in the Summer of Love with Sgt. Pepper’s Lonely Hearts Club Band, a groundbreaking masterwork that became popular music’s most universally acclaimed album. The album is newly mixed by Giles Martin and engineer Sam Okell in stereo, sourced directly from the four-track masters at Abbey Road Studios in London, and guided by the original, Beatles-preferred mono mix produced by his father, George Martin.

END_OF_DOCUMENT_TOKEN_TO_BE_REPLACED

An unprecedented 5 year run! More than 700 sold out shows! 3 million spectators! Everything about the record -breaking show that changed the history of entertainment scene in Las Vegas!

END_OF_DOCUMENT_TOKEN_TO_BE_REPLACED

The electrifying special was taped at the legendary Apollo Theater in New York City, where Mars kicks off the primetime special in spectacular style, with an epic performance atop the Apollo’s landmark marquee. Also, Mars and his band the Hooligans take to the streets, visiting, singing and entertaining locals in exciting, intimate, must-see moments.

END_OF_DOCUMENT_TOKEN_TO_BE_REPLACED

Miley Cyrus has always been herself, but on Wednesday (October 2), during the MTV documentary, “Miley: The Movement” fans are going to see first-hand, how, in just a few short months, she evolved into one of the biggest pop stars in the world. Long before she was twerking, rapping and shocking fans everywhere, Cyrus was finding herself. And with each year that passed, it brought her closer to figuring out which artist she wanted to become. MTV has been there every step of the way.

END_OF_DOCUMENT_TOKEN_TO_BE_REPLACED

Hot off the heels of just being honored as Billboard’s Woman Of The Year, receiving multiple Grammy nominations, and having played 140 shows in 13 countries around the globe, P!nk brings the sold-out tour and amazing spectacle of The Truth About Love Tour: Live From Melbourne to fans on DVD, Blu-Ray and digital long form on January 21, 2014.