Seven years after the Monsterpocalypse, Joel Dawson (Dylan O’Brien), along with the rest of humanity, has been living underground ever since giant creatures took control of the land. After reconnecting over radio with his high school girlfriend Aimee (Jessica Henwick), who is now 80 miles away at a coastal colony, Joel begins to fall for her again. As Joel realizes that there’s nothing left for him underground, he decides against all logic to venture out to Aimee, despite all the dangerous monsters that stand in his way. The fun-filled and action-packed adventure also stars Michael Rooker and Ariana Greenblatt.

END_OF_DOCUMENT_TOKEN_TO_BE_REPLACED

Batman, Bronze Tiger, Lady Shiva, and Richard Dragon join forces when they come to realize that they share a common acquaintance. The Martial Arts Master that trained them has been missing for a number of years and under mysterious circumstances. When a cursed relic resurfaces, the mystery of their dead master re-opens and Batman and his former classmates must face-off in the ultimate test of their Martial Arts kills to gain control of this dangerous relic.

END_OF_DOCUMENT_TOKEN_TO_BE_REPLACED

NYPD cop John McClane goes on a Christmas vacation to visit his wife Holly in Los Angeles where she works for the Nakatomi Corporation. While they are at the Nakatomi headquarters for a Christmas party, a group of robbers led by Hans Gruber take control of the building and hold everyone hostage, with the exception of John, while they plan to perform a lucrative heist. Unable to escape and with no immediate police response, John is forced to take matters into his own hands.

END_OF_DOCUMENT_TOKEN_TO_BE_REPLACED 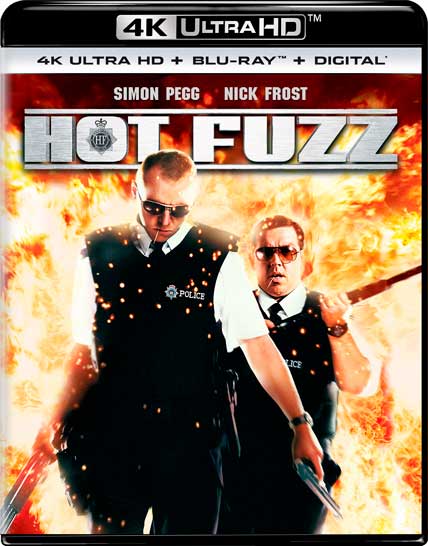 Top London cop, PC Nicholas Angel is good. Too good. And to stop the rest of his team looking bad, he is reassigned to the quiet town of Sandford. He is paired with Danny Butterman, who endlessly questions him on the action lifestyle. Everything seems quiet for Angel, until two actors are found decapitated. It is called an accident, but Angel isn’t going to accept that, especially when more and more people turn up dead. Angel and Danny clash with everyone, whilst trying to uncover the truth behind the mystery of the apparent “accidents”.

END_OF_DOCUMENT_TOKEN_TO_BE_REPLACED

Dr. Adrian Helmsley, part of a worldwide geophysical team investigating the effect on the earth of radiation from unprecedented solar storms, learns that the earth’s core is heating up. He warns U.S. President Thomas Wilson that the crust of the earth is becoming unstable and that without proper preparations for saving a fraction of the world’s population, the entire race is doomed. Meanwhile, writer Jackson Curtis stumbles on the same information. While the world’s leaders race to build “arks” to escape the impending cataclysm, Curtis struggles to find a way to save his family. Meanwhile, volcanic eruptions and earthquakes of unprecedented strength wreak havoc around the world.

END_OF_DOCUMENT_TOKEN_TO_BE_REPLACED

Beneath Anna Poliatova’s striking beauty lies a secret that will unleash her indelible strength and skill to become one of the world’s most feared government assassins. An electrifying thrill ride unfolding with propulsive energy, startling twists and breathtaking action, ANNA introduces Sasha Luss in the title role with a star-studded cast including Academy Award Winner Helen Mirren, Cillian Murphy, and Luke Evans.

END_OF_DOCUMENT_TOKEN_TO_BE_REPLACED

From the outer reaches of space to the small-town streets of suburbia, the hunt comes home. Now, the universe’s most lethal hunters are stronger, smarter and deadlier than ever before, having genetically upgraded themselves with DNA from other species. When a young boy accidentally triggers their return to Earth, only a ragtag crew of ex-soldiers and a disgruntled science teacher can prevent the end of the human race.

END_OF_DOCUMENT_TOKEN_TO_BE_REPLACED

Jack Malik is a struggling singer-songwriter in an English seaside town whose dreams of fame are rapidly fading, despite the fierce devotion and support of his childhood best friend, Ellie. After a freak bus accident during a mysterious global blackout, Jack wakes up to discover that he’s the only person on Earth who can remember The Beatles.

END_OF_DOCUMENT_TOKEN_TO_BE_REPLACED

A kindhearted street urchin named Aladdin embarks on a magical adventure after finding a lamp that releases a wisecracking genie while a power-hungry Grand Vizier vies for the same lamp that has the power to make their deepest wishes come true.

END_OF_DOCUMENT_TOKEN_TO_BE_REPLACED

When Bond’s latest assignment goes gravely wrong and agents around the world are exposed, MI6 is attacked forcing M to relocate the agency. These events cause her authority and position to be challenged by Gareth Mallory (Ralph Fiennes), the new Chairman of the Intelligence and Security Committee. With MI6 now compromised from both inside and out, M is left with one ally she can trust: Bond. 007 takes to the shadows – aided only by field agent, Eve (Naomie Harris) – following a trail to the mysterious Silva (Javier Bardem), whose lethal and hidden motives have yet to reveal themselves.

END_OF_DOCUMENT_TOKEN_TO_BE_REPLACED

In the near future, a weary Logan cares for an ailing Professor X, somewhere on the Mexican border. However, Logan’s attempts to hide from the world, and his legacy, are upended when a young mutant arrives, pursued by dark forces.