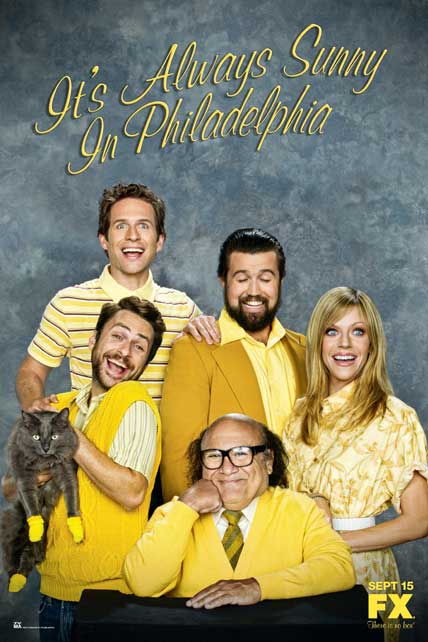 After an electric heating blanket shorts out while the gang watches the Wiz they look in the mirror and realize they’ve turned black. They have to figure out how to get back to being themselves by going through all the classic body switch movie shenanigans they encounter.

Season 12, Episode 02 – “The Gang Goes to a Water Park”
The gang takes a trip to a local waterpark, ripe with personal agendas and ulterior motives. Dennis feeds off his mantra of “the park provides” and takes on a protégé. Frank and Charlie are determined to ride every ride by any means necessary and Mac and Dee get stuck in a tube slide for most of the day.

Season 12, Episode 03 – “Old Lady House: A Situation Comedy”
Charlie thinks Mac’s mom is holding his mom hostage so the gang installs spy cameras in their house to monitor what’s going on. What they end up discovering is the moms are quite entertaining once Dennis makes some quick edits and adds a laugh track to the surveillance footage. Dee wants in on the new hit show and Frank becomes obsessed with banging Charlie’s mom now that he’s seen her on TV.

Season 12, Episode 04 – “Wolf Cola: A Public Relations Nightmare”
Franks Fluids LLC is in big trouble after a news segment shows Wolf Cola has become the official drink of Boko Haram. Dee and Dennis help with the PR nightmare while Charlie and Mac work on a scheme to make Fight Milk the official drink of the UFC.

Season 12, Episode 05 – “Making Dennis Reynolds a Murderer”
Filmed in the true crime style of ‘Making a Murderer’ and ‘The Jinx’, it begins with 911 call: A cat-woman formerly known as Maureen Ponderosa has been found dead in an alley and Dennis is the prime suspect.

Season 12, Episode 06 – “Hero or Hate Crime?”
The gang goes to a professional arbitrator to decide who’s the rightful owner of a scratch off lottery ticket. While they’re there they also try to clear up whether or not the events surrounding the scratcher prove that Frank is a hero or hate monger.

Season 12, Episode 08 – “The Gang Tends Bar”
It’s Valentine’s Day and Paddy’s is packed with customers. Dennis implores the gang to do one day of actual work but everyone else is distracted by a mystery crate Cricket spotted in the alley. Eventually, the gang becomes convinced Dennis really wants them to work on their relationships and everyone shares their grievances without much resolution.

Season 12, Episode 09 – “A Cricket’s Tale”
We get to see a typical day in Cricket’s world and then a possible redemption when his family intervenes. Will Cricket finally move on from the gang, finding love in the process? Will Cricket go from filthy beast to his former self, Matthew Mara?

Season 12, Episode 10 – “Dennis’ Double Life”
Dennis reveals he has a baby from his Wade Boggs layover in North Dakota. Everyone offers a solution for how to get him out of this jam. Mac suggests they pretend to be a couple and Frank wants to make the broad a “decent” proposal b/c $1 million for sex is indecent. In the end, Dennis has to decide which life he wants to continue to lead.