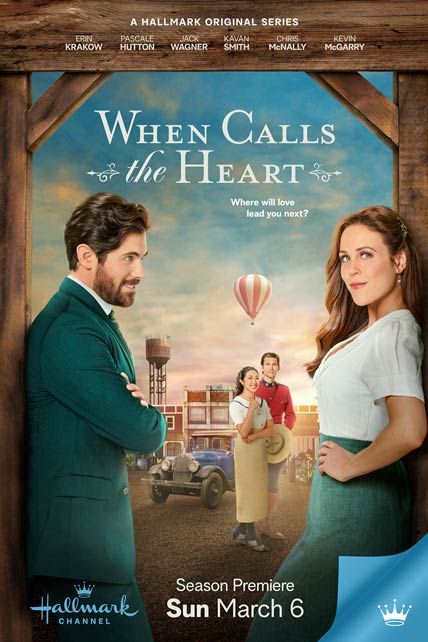 When Calls the Heart is inspired by Janette Oke’s bestselling book series about the Canadian West, the series tells the captivating story of Elizabeth Thatcher, a young teacher accustomed to her high society life, who receives her first classroom assignment in Coal Valley, a small coal mining town where life is simple, but often fraught with challenges. Upon arrival, Elizabeth befriends Abigail Stanton, a wife and mother whose husband, the foreman of the mine, along with a dozen other miners, has just been killed in an explosion. The newly widowed women find their faith is tested when they must go to work in the mines to keep a roof over their heads. Set against the wild canvas of a 19th century coal town, Elizabeth will have to learn the ways of the frontier if she wishes to thrive in the rural west on her own.

Season 9, Episode 01 – “In Like a Lion”
Change is in the air for Hope Valley with the foundry to be built and the upcoming mayoral election. Elizabeth arrives home from a trip to Hamilton. A potential investor arrives in town to discuss the oil business with Lucas.

Season 9, Episode 02 – “Out Like a Lamb”
Hope Valley elects a new mayor. Lucas and Elizabeth try to find the “little moments” in their relationship. Elizabeth offers to help Nathan with his horse after the hit-and-run, but it’s newcomer, Mei, who connects with Newtom.

Season 9, Episode 03 – “Turn the Page”
Elizabeth’s book is finally published and it’s the talk of the town. Lucas plans a surprise party to celebrate the event, but some bad book reviews have Elizabeth in a less social mood.

Season 9, Episode 04 – “Straight From the Heart”
Elizabeth sees a new side of Lucas when a flu bug leaves her without a babysitter and he volunteers to watch Little Jack.

Season 9, Episode 05 – “Journey into Light”
School Inspector Augustus Landis is back in town and starts questioning Elizabeth’s new accreditation to teach Angela. Lucas and Nathan decide to have a race, animal vs. machine.

Season 9, Episode 06 – “Past, Present, Future”
Lee writes a new editorial in the Valley Voice. Gowen worries about the oil company’s intentions now that Fiona has all but secured a deal with investors.

Season 9, Episode 08 – “Hope Valley Days”
Residents of Hope Valley continue to enjoy the festival, and everyone comes together to help one of their own.

Season 9, Episode 09 – “Recent Memory”
Walden arrives back in town, putting more pressure than ever on Lucas and the residents of Hope Valley. Bill comes up with a plan to stop Walden. New investors arrive from the oil company.

Season 9, Episode 10 – “Never Say Never”
Elizabeth and Rosemary don’t agree about how best to share unsettling news in the town regarding the coal mines, but that’s put behind them when Rosemary hears even more shocking news.

Season 9, Episode 11 – “Smoke on the Water”
With the mine reopening imminent, Gowen decides to take drastic measures to make sure it stays closed; Elizabeth and Lucas struggle to communicate with each other; Lucas gets out of town to clear his head.

Season 9, Episode 12 – “Rock A Bye Baby”
Elizabeth worries about her relationship with Lucas, while Bill helps Gowen through the fallout of the mine explosion. Rosemary and Lee receive some news.

2 Responses to this entry.

Hi Max hope you and team are well
Can I ask why do the images now have an .webp extension and how can I convert them to icons
Regards
Termite