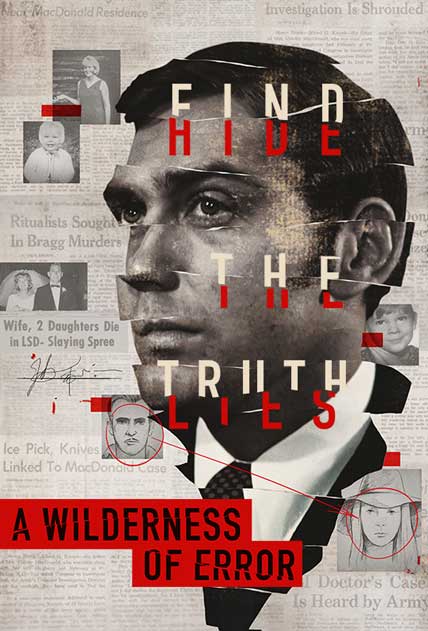 When handsome Army Surgeon Jeffrey MacDonald is sent to prison for killing his family, a storm of swirling narratives challenges our very ability to find the truth. All the while overshadowing a chilling possibility: MacDonald may be an innocent man. A Wilderness of Error examines the evidence in the case against MacDonald, who was convicted in 1979 of murdering his pregnant wife and two daughters. A Green Beret physician, MacDonald claimed that the murders were committed by drug-crazed hippies.

Season 1, Episode 01 – “Girl in a Floppy Hat”
Famed filmmaker Errol Morris is obsessed with one of America’s most popularized true crimes: the murder of a pregnant wife and two young daughters on an Army base in 1970. Green Beret doctor Jeffrey MacDonald said a band of drugged-crazed hippies attacked his family, led by a girl in a floppy hat. Army investigators said MacDonald committed the murders.

Season 1, Episode 02 – “A Time of Suspicion”
After an Army hearing frees Green Beret Dr. Jeffrey MacDonald, his father-in-law demands a reinvestigation. But when he sees all the evidence, he’s shocked by where it leads.

Season 1, Episode 03 – “Should the Jury Find”
Nine years after the murders of his pregnant wife and two young daughters, the guilt of Green Beret Dr. Jeffrey MacDonald is put to a civilian jury. The defense calls a surprise witness: The Girl in a Floppy Hat.

Season 1, Episode 04 – “When a Narrative Becomes Reality”
When Joe McGinniss’ book, “Fatal Vision,” is published, the story it tells is not what convicted killer Jeffrey MacDonald had hoped for. New evidence is discovered that may finally prove Jeffrey MacDonald is innocent. The Girl in the Floppy Hat sits for an interview.

Season 1, Episode 05 – “A Wilderness of Error”
Jeffrey MacDonald served more than 30 years in prison when a federal judge finally agrees to hear the new evidence in his case. Errol Morris heads to North Carolina believing the truth will finally come out.