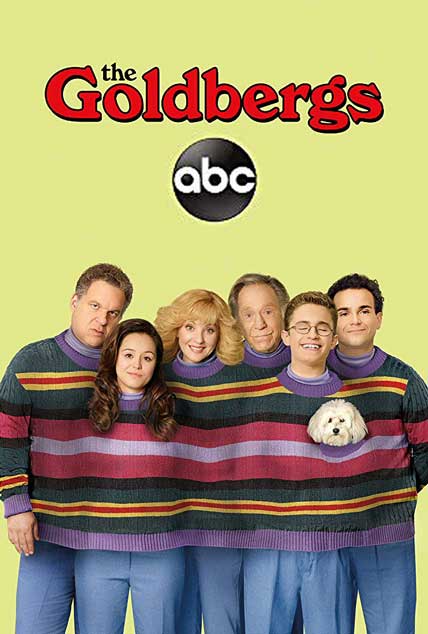 In the Season 7 premiere, Beverly insists the family take a road trip to go on vacation Disneyland in Anaheim, Cal., before Erica and Barry go off to college. But like the film, things do not go as planned as they travel across the country. Meanwhile, Erica worries more and more about her relationship with Geoff when he teases “we need to talk” and won’t tell her anything until the family returns from their adventure.

Season 07, Episode 02 – “Dana’s Back”
Adam gets a surprise from his past: Dana returns to William Penn. Meanwhile, Barry and Erica are finally off to college, until they realize they have nowhere on campus to live.

Season 07, Episode 03 – “Food in a Geoffy”
Inspired by Murray’s love of sandwiches, Geoff starts a food delivery service aptly named Food in a Geoffy. But he quickly learns running a business comes with challenges. Meanwhile, Adam is the only child at home now and gets a lot more attention from Beverly.

Season 07, Episode 04 – “Animal House ”
Barry decides to rush a fraternity, but it doesn’t quite work out as he expects. Meanwhile, Beverly and Murray find themselves getting closer to being empty nesters, which means more hobbies and activities for Beverly and more TV for Murray.

Season 07, Episode 05 – “Parents Thursday”
While at school, Erica attempts to fool Beverly into thinking Parents Weekend has been rescheduled to Parents Thursday so the family won’t attend. Meanwhile, William Penn is doing “Romeo & Juliet,” the perfect play for Adam to romance Dana until someone else gets the leading lady.

Season 07, Episode 06 – “A 100% True Ghost Story”
Beverly scores a bargain on four paintings. Once they make it home, she and Adam determine something supernatural is causing them to be destroyed. Much to Murray’s dismay, they call a psychic for help. Meanwhile, Barry decides to throw a huge “Rocky Horror Picture Show”-themed party against Erica’s wishes. Their confrontation leads to a visit to the dean’s office.

Season 07, Episode 07 – “WrestleMania”
Murray decides to buy WrestleMania tickets to spend time with Barry and Adam, but he buys fake tickets so they can’t get in. Meanwhile, Beverly forms her own neighborhood watch group when the Frentas decide neighbor Jane Bales will be the Watch Captain and not her.

Season 07, Episode 08 – “ANGST-GIVING”
Beverly’s patience with Pop Pop is put to the test due to his endless Thanksgiving demands, but she is able to put aside her own feelings to help heal the longstanding rift between Murray and Pop Pop. Meanwhile, Barry and Erica are ready to return home for the holiday, but Uncle Marvin accidentally drives them to Pittsburgh. Marvin attempts to make it right not knowing if they will make it to Jenkintown in time to celebrate the holiday.

Season 07, Episode 09 – “THE BEVERLY GOLDBERG COOKBOOK: PART 2”
Beverly is approached by a publishing company for her cookbook, but they don’t like how she writes, so Adam must rewrite her work. Meanwhile, Barry and Erica cannot stop fighting as roommates and they make themselves crazy. Geoff tries to moderate the situation and they come up with a housing plan that changes everything.

Season 07, Episode 10 – “IT’S A WONDERFUL LIFE”
Hoping to outdo the Kremps, Beverly decides the Goldbergs must do a better family holiday card, but Geoff is surprised he is not invited to be in the photo. Meanwhile, a pranking war with Barry and JTP quickly spirals out of control.

Season 07, Episode 11 – “PICKLEBALL”
Beverly discovers Murray is actually a year younger than they knew so she plans a do-over at celebrating his 50th birthday, while Coach Mellor attempts to prepare non-athletic Adam for tryouts for pickleball.

Season 07, Episode 12 – “GAME NIGHT”
Geoff struggles to keep his living arrangement with Erica and Barry a secret from Beverly during game night, while Adam goes to his guidance teacher for a lesson in being cool so he can get closer to a new girl in chemistry class.

Season 07, Episode 13 – “GEOFF THE PLEASER”
Adam questions his career path of filmmaking when “the other Adam” moves back from Los Angeles and warns him making it big in Hollywood isn’t easy. Meanwhile, the JTP house is in shambles, and Geoff becomes the home manager as they know how much he loves to please and can’t say no.

Season 07, Episode 14 – “Preventa Mode”
When Erica and Barry receive the same grade in class, Erica knows something’s up and finds out something very interesting about her brother. Meanwhile, Beverly gets involved to help Adam win his crush as a date for the upcoming Cupid Couples’ Skate at William Penn Academy.

Season 07, Episode 15 – “DAVE KIM’S PARTY”
A big party is being thrown at Dave Kim’s house and Pops has a plan to make Adam cool for the big event. Meanwhile, Beverly’s cookbook has made her “famous,” leading her to become out of control and fame-hungry, but eventually she learns an important lesson.

Season 07, Episode 16 – “Body Swap”
Adam is torn between following Beverly’s rules when it comes to off-campus lunch or going to the mall food court with his friends. Meanwhile, after using Barry’s college ID to get food at the dorm, Geoff goes overboard and becomes the “student” Barry wishes he could be.

Season 07, Episode 17 – “A FISH STORY”
Despite Beverly’s insistence, Adam and Murray don’t want to go on a camping trip, so father and son create a film faking it, but their wilderness experience backfires when the Kremps come over for dinner. Meanwhile, Erica joins an all-girl a cappella group and learns an important lesson after taking over the group.

Season 07, Episode 18 – “SCHMOOPIE’S BIG ADVENTURE”
Mother and son have a bonding experience when Beverly buys a bicycle for Adam just like the one from “Pee Wee’s Big Adventure,” while Barry and Erica turn Murray’s furniture store into an after-hours lounge for college students.

Season 07, Episode 19 – “ISLAND TIME”
Erica, Barry, Geoff and the JTP go on a spring break trip and things are not what they expect. Meanwhile, Adam questions if college is for him when his test scores are not as good as he was hoping for.

Season 07, Episode 21 – “Oates & Oates”
While throwing a telethon at their college to raise money for Earth Day, Barry attempts to woo Ren when he overpromises he can get Hall & Oates to perform. Meanwhile, Beverly attempts to set Bill up, but things go awry when he finds happiness with a woman he meets through Beverly’s enemy.

Season 07, Episode 22 – “The Fake-up”
Adam and Brea’s relationship is going well until Beverly’s over-involvement causes them to fake a breakup. Meanwhile, Lainey is back in Jenkintown which throws Barry for a loop regarding his blossoming relationship with Ren.

Season 07, Episode 23 – “PRETTY IN PINK”
Adam and Brea decide to go to prom together, but Adam worries he won’t be Prom King, leading Beverly to take matters into her own hands. Meanwhile, Barry teaches Erica how to be compassionate and caring when Geoff’s dad is in the hospital.