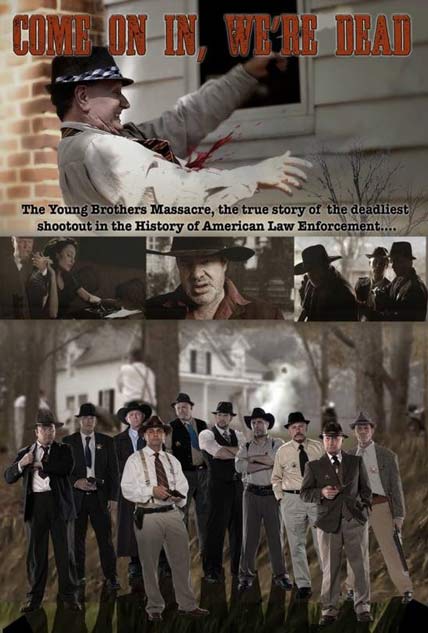 The true story of the The Young Brothers Massacre, 1932. The record for the most lawmen shot dead in the history of the United States. 10 cops and one civilian in Springfield, Missouri went to arrest 2 small-time gangsters known as The Young Brothers. The young men (Harry, 25 and Jennings, 30) had been on the run for the murder of a town marshall 3 years earlier. The Sheriff, Marcell Hendrix, had been neighbors with the fugitive?s family and late father in particular, so he didn’t expect any trouble. As a consequence, they showed up at the family farm with nothing but the six-guns on their belts, and little to no additional ammo, In spite of the fact that the boys were well known for their marksmanship. The farm was on a large open piece of land with a scattering of trees around the farmhouse. When the Sheriff and his deputy pushed in the door, a massacre ensued, The officers would become trapped behind those trees, as the brothers systematically picked off the officers from the cover of the dark farmhouse.