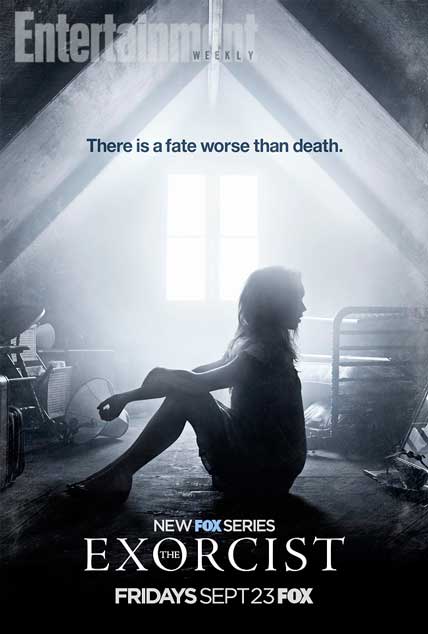 In the Season 2 premiere, Father Tomas continues his training to become an exorcist under the watchful eye of his partner Marcus Keane. Their travels lead them to a troubled young woman in rural Montana, where their investigation puts them in the crosshairs of her extended family. In other events, the state sends a social worker to determine whether Andy Kim’s group home for at-risk foster children should be closed.

Season 02, Episode 02 – “Safe As Houses”
Tomas and Marcus attempt to finish Cindy’s exorcism and escape her enraged family. Also, Rose conducts her inspection of Andy Kim’s household and is concerned about Caleb’s mental state; Andy’s neighbors offer to teach the children farming skills, but there’s something sinister behind their intentions; Verity may be hiding something from the rest of her foster family; and Father Bennett tries to warn the Office of Exorcism of a new threat, but finds his attempts railroaded by menacing forces.

Season 02, Episode 03 – “Unclean”
The situation at the foster home continues to deteriorate, as Andy tries to help his foster daughter, Grace, overcome her agoraphobia. Meanwhile, Marcus and Tomas travel to Seattle where they encounter a new possession case, discovering a young girl who has been targeted by a force of pure evil. Father Bennett tracks down a rogue church operative named Mouse who is waging a one-woman crusade against the demonic conspiracy.

Season 02, Episode 04 – “One for Sorrow”
As Andy confronts the strange incidents taking place on the island, his foster home receives a surprising new addition. Marcus investigates a series of natural disturbances with the help of a local wildlife biologist, while Tomas continues to question the strange visions that led him to Seattle. Meanwhile, Bennett’s uneasy partnership with the enigmatic Mouse takes a dark turn.

Season 02, Episode 05 – “There but for the Grace of God, Go I”
As Tomas and Marcus continue to investigate the strange incidents at the foster home, the demon finally makes its presence known. The two priests must race against the clock to find evidence of possession before it is too late. Meanwhile, Andy and Rose take the children on a camping trip, setting them on a collision course with the supernatural presence on the island. Back in Rome, Father Bennett’s uneasy partnership with Mouse takes a turn as disturbing new information comes to light.

Season 02, Episode 05 – “Darling Nikki ”
A visit to the foster home carries deadly consequences, as Marcus and Father Tomas attempt to draw the demon out of hiding. Rose finds herself the target of the demon’s wrath. And no one suspects that a new danger may be lurking in the woods, waiting for its moment to strike. Meanwhile, Father Bennett and Mouse take the fight directly to the conspiracy as they attempt to hunt down an old adversary.

Season 02, Episode 06 – “Darling Nikki ”
A visit to the foster home carries deadly consequences, as Marcus and Father Tomas attempt to draw the demon out of hiding. Rose finds herself the target of the demon’s wrath. And no one suspects that a new danger may be lurking in the woods, waiting for its moment to strike. Meanwhile, Father Bennett and Mouse take the fight directly to the conspiracy as they attempt to hunt down an old adversary.

Season 02, Episode 07 – “Help Me”
As the exorcism begins, the fate of the foster home hangs in the balance. This is an adversary unlike anything Marcus and Tomas have ever faced, and in order to save this family, the two of them must journey into the mouth of madness itself.

Season 02, Episode 08 – “A Heaven of Hell”
As Father Bennett and Mouse head west, new details about Mouse’s tragic past comes to light. With time running out to finish the exorcism, one of the foster children is faced with a difficult choice.

Season 02, Episode 09 – “Ritual & Repetition”
As the exorcism reaches a critical juncture, Tomas engages the demon in a desperate battle to save Andy’s soul. Meanwhile, Marcus and Rose attempt to get the foster children off the island, but the demon has other plans. As the storm of the century descends upon the island, salvation may come from an unlikely source.

Season 02, Episode 10 – “Unworthy”
In the Season 2 finale, one priest fights for his life in the hospital; and another is forced to confront the ghosts of his past. With time running out to save Andy’s life, one of the exorcists must make the ultimate sacrifice.

Thanks, MaxD and team! 🙂