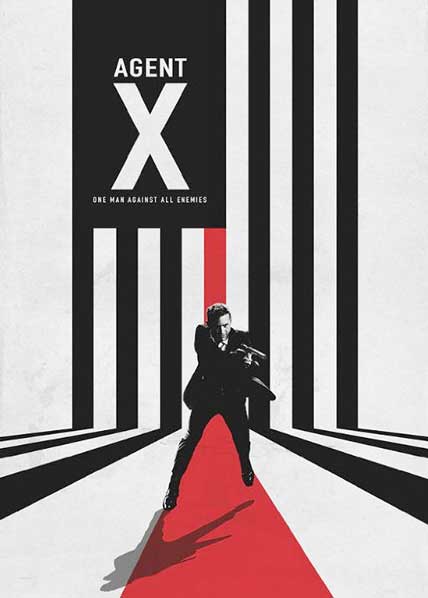 In times of extreme crisis, when traditional law and government aren’t in a position to help, there is an unseen hand that works to protect this country and its citizens from all manner of threats by any means necessary. Hidden from the view of the public — and even from the President — there is a top secret agent who is trained and ready to serve, deployed only at the careful discretion of the Vice President. This is Agent X.

Season 01, Episode 01 – “Pilot”
After her inauguration, newly elected Vice President Natalie Maccabee is initiated into a covert world of danger by her chief steward, Malcolm Millar and Chief Justice Caleb Thorne. Contrary to what the public believes, the job of Vice President is far from ceremonial. In fact, enshrined in a secret version of the Constitution is a section endowing Natalie with her own secret agent, John Case, to be deployed in times of crisis. Natalie quickly finds herself in play when the daughter of FBI Director Stanton is kidnapped, and authorities are helpless in rescuing her.

Season 01, Episode 02 – “The Enemy of My Enemy”
One of John’s old nemeses, terrorist Malik Ahmad, steals an arsenal of nuclear warheads and a scientist to activate them. John is forced to work with his enemy Olga Petrovka in order to destroy them and rescue the scientist. Meanwhile, Natalie and Malcolm endeavor to protect John’s identity from an FBI investigation.

Season 01, Episode 03 – “Back in Your Arms”
John breaks the protocol of the Agent X Brotherhood to protect his former lover, Pamela Richardson, from members of a Washington D.C.–based cabal intent on taking down the President. Meanwhile, Natalie, Malcolm, and Judge Thorne work to unmask the members of the conspiracy.

Season 01, Episode 04 – “The Devil & John Case”
The cabal trail leads John to a lawless Mexican town, where he is drawn into a deadly feud between the local drug lord, nicknamed El Diablo, and the town’s police chief, Luna. At the same time, Natalie probes into a romantic connection between her late husband, Steven, and the fiancé of her political adversary, Speaker of the House Miles Latham.

Season 01, Episode 05 – “Truth, Lies, and Consequences”
A biological weapon is used in a failed assassination attempt on a high ranking government official. John, Natalie, and Malcolm investigate the case, and quickly find themselves racing the clock to stop a domestic terrorist group from deploying the virus on a greater, catastrophic scale.

Season 01, Episode 06 – “The Sacrifice”
John, incognito as a Secret Service Agent, accompanies Natalie on clandestine peace talks between the Mexican government and Marxist insurgents. When their helicopter is shot down by nefarious forces, the group is suddenly stranded in the middle of nowhere, hunted by some of the most dangerous men in the world.

Season 01, Episode 08 – “Angels and Demons”
John travels in disguise to a party on a reclusive billionaire’s island, in the hopes of stealing a dangerous high tech weapon, code named Geryon. At the same time, Natalie struggles to contain the latest fallout from the conspiracy against the President.

Season 01, Episode 09 – “Penultimatum”
A terrorist blackmails John into going on a suicide mission.

Season 01, Episode 10 – “Fidelity”
John tries to rescue Natalie, Eckhart and international leaders from a hostage crisis in an opera house in Paris. The Season 1 finale.